Search for Names, Places and Biographies 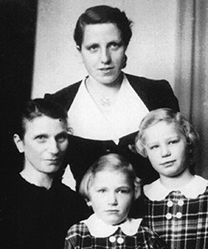 Johanna Töpfer, née Sukowski, born 12/4/1891 in Hamburg, repeatedly arrested 19331939, transferred from Ravensbrück concentration camp to the Bernburg mental hospital, where she was murdered on March 27th, 1942.

Margaretha Johanna Töpfer, née Sukowski, was born as the third of fifteen children on December 4th, 1891. Her parents had come from Poland. The family lived in bitter poverty in the rear building of Alter Steinweg 27. Six of their children died of diseases in early childhood. Father August Sukowski was a blacksmith, mother Maria, née Dmuchowski, a cook. There was a lot of singing in the family, Johanna was said to have had a beautiful voice as clear as a bell.

She entered the school in Neustädter Strasse in 1899 and completed four grades. In 1908, years after leaving school, she was fined 10 marks for having allegedly stalked her former teacher together with a classmate. The times were hard, and at the age of 12, Johanna kept a lookout when other kids were stealing coal. Often, her mother sent her out to beg for food. She was the smallest and slightest in the family, so that people sometimes gave her a bit. Johanna was also sent to the grocer's to shop on credit, a common practice in those days: storekeepers added up customers' debts until a family had money to pay them back.

In 1908, Johanna found work, first as a day laborer, then at the cafeteria of Deutsche Bank. In spite of this, Johanna was admitted to a reformatory, where she rose to be head of her ward.

On July 5th, 1912, Johanna gave birth to her son Reinhold Rudolf Hans. At the time, she lived at Marktstrasse 107. The father of her child was named Max Schaller. Johanna peddled pencils from door to door to make a living for herself and her son. A year later, her daughter Gertrud-Grete was born; it's unclear whether Max Schaller was also the girl's father. Johanna lived with him for a short time until he was drafted into the army. Max Schaller was killed in the Great War in 1917.

In 1922, the Altona district court sentenced Johanna to four months in jail. Allegedly for having stolen a bit of a cigarillo from the living-room of a cigar dealer while peddling her pencils.

More hard years followed. Johanna nursed her mother, who had suffered a stroke. Maria Sukowski died in 1927; her father had already died in Kiel in 1924, after her parents' divorce. In 1928, Johanna met Ernst Friedrich Karl Töpfer, ten years her junior, They married. Ernst Töpfer worked as an assistant clerk at the Blohm und Voss shipyard. The family now lived at Sartoriusstrasse 31.

In 1929, the couple's daughter Annemarie was born. After a long illness, Johanna's husband lost his job. Ernst Töpfer then peddled newspapers from door to door to support the family, but he made very little. In 1930, Johanna Töpfer was sentenced to eight months in jail for stealing. She got mitigating circumstances because she was pregnant. The judge also considered the family's distress. Johanna appealed. Her daughter Gertrud was born in 1931. On March 26th of that year, the Hamburg court of appeals passed an order to get a medical opinion on Johanna Töpfer; in April, the psychiatric care department of the health agency intervened. At the Friedrichsberg state mental hospital, Prof Dr. G. declared the accused "mentally feeble and therefore inferior!" The court ruled: Four years at hard labor, with regard to her inferiority. The Judicial Aid for Adults wrote to the prosecutor: "Ernst Töpfer declares he will take his childrens and his own life if they were to be separated forever.

Thus, Johanna  who then had been in the Fuhlsbüttel penitentiary since August 7th, 1935  was transferred to the jail in Lübeck-Lauerhof. The prison physician wrote: Johanna is still to be considered partially responsible and fit for detention. " On September 4th, 1935, she was transferred to the jail in Kiel; three days later, she was discharged and could finally return to her family. Her son Hans also got in trouble with the police; he was accused of stealing, but denied the offense. Thereafter, all members of the Sukowski family were put under police observation because of their way of life. Hans Reinhold Sukowski was homosexual, which made things worse.

In December 1956, Ernst Töpfer filed for divorce, whereupon Johanna lost all mainstay. Jobless, she now lived in the big apartment in Sartoriusstrasse with her three girls Gretel, 24 years old, Annemarie, 8, and Gertrud, 6. Together, they received 27 reichsmarks a month from the welfare agency  by far not enough for subsistence.

On March 9th, 1937, a wave of arrests swept over Germany. About 2,000 men and women who had been convicted repeatedly were affected, Johanna among them. According to Nazi ideology and the idea of the "peoples community, they were considered "professional or "habitual criminals.

The Moringen concentration camp was the next station of Johannas suffering. Heavy labor, hunger, cold and the harassments of the SS guards harrowed the prisoners, all of them women. But the worst for Johanna and many other fellow sufferers was the uncertainty about the fate of their children. By now, the Reich criminal policed in Berlin were in charge of Johanna Töpfers case. On September 15th, 1937, she was taken back to Hamburg for another trial in which she was sentenced to a further five months in jail. Again, the court allowed mitigating circumstances acted in distress and had almost nothing to eat for her children and herself. But the verdict extended her period of detention. After the sentence, she only softly murmured: "I only want to be back with my children.

Having served her prison term, Johanna was taken back to the Moringen camp on February 3rd, 1939. The camp commandant sent the Hamburg district court a bill for 48,90 reichsmarks to cover the cost of her transport. A month later, on March 21st, 1938, the Moringen concentration camp was dissolved, and Johanna deported to the Lichtenburg concentration camp on the third transport; but Lichtenburg did not mark the end of her suffering.

In May 1939, the women from Lichtenburg were taken to Ravensbrück, Johanna Töpfer among them. We do not know how she fared there, to which block she was assigned, whether she was able to make friends. Her inmate number was 546, she was now 48 years; her inmate category was "B.V. Berufsverbrecher, "professional criminal. And the record also said she was Jewish. But Johanna was neither a professional criminal, nor was she Jewish. Nonetheless, she was put on list called "14f13", the code for "inmate euthanasia.

The prisoners came from Ravensbrück, Buchenwald, Flossenbürg, Neuengamme, Sachsenhausen and other camps. The list contained the names of elderly and sick inmates and of those no longer fit for work. Johanna Töpfer, née Sukowski, did not die in Ravensbrück; like about 1,600 other women between March and April of 1942, she was dragged from her bed early in the morning. It must have been around March 27th that the camp guards loaded her and others on trucks bound for the Heil- und Pflegeanstalt Bernburg, a state mental hospital. Immediately on arrival, the women were herded into the cellar, ordered to undress, and then driven into the gas chamber. The bodies were cremated. During all this, the regular hospital routine continued next door. Doctors removed the brains of some victims for medical experiments.

Reports from survivors of Ravensbrück confirm these events. Probably the most famous victim of this operation was Olga Benario Prestes, a prominent German-Brazilian communist. One of the culprits, Heinrich Friedrich Karl B., physician in Brandenburg and Bernburg, was sentenced to three years in jail as an assistant to 9,200 counts of murder by the Frankfurt court of appeals in 1986. "Only that number of the 11,000 killings could be proved without doubt.

At the beginning of April 1942, Johannas daughters received notice from Ravensbrück that their mother had died there on March 27th. Grete, the eldest, wrote to the camp commandant, asking for her mothers wedding ring to be returned. The Answer: "She never had a wedding ring, but you can get the urn."

It is unclear if the urn that was sent actually contained the ashes of Olga Töpfer. It was buried at the Ohlsdorf cemetery on June 17th, 1942 in the grave of her mother. It is listed as a war grave; the cemetery records give the number 165 and name the Ravensbrück crematory.

In February 1941, Johannas son Hans was sentenced to a total of three years and nine months at hard labor with subsequent preventive detention for repeated theft and an offense against Art. 175 of the penal code  ay cellmate had denounced him as a homosexual. On November 6th, 1943, he was deported from Bremen-Oslebshausen concentration camp to Hamburg-Neuengamme, where his trace disappears. His family never saw him again; it remains unclear to this day if he survived. Johannas daughter Annemarie went to England in 1948, where she married in 1950. In 1960, Annemaries sister Gretel also left Hamburg and followed her to England.